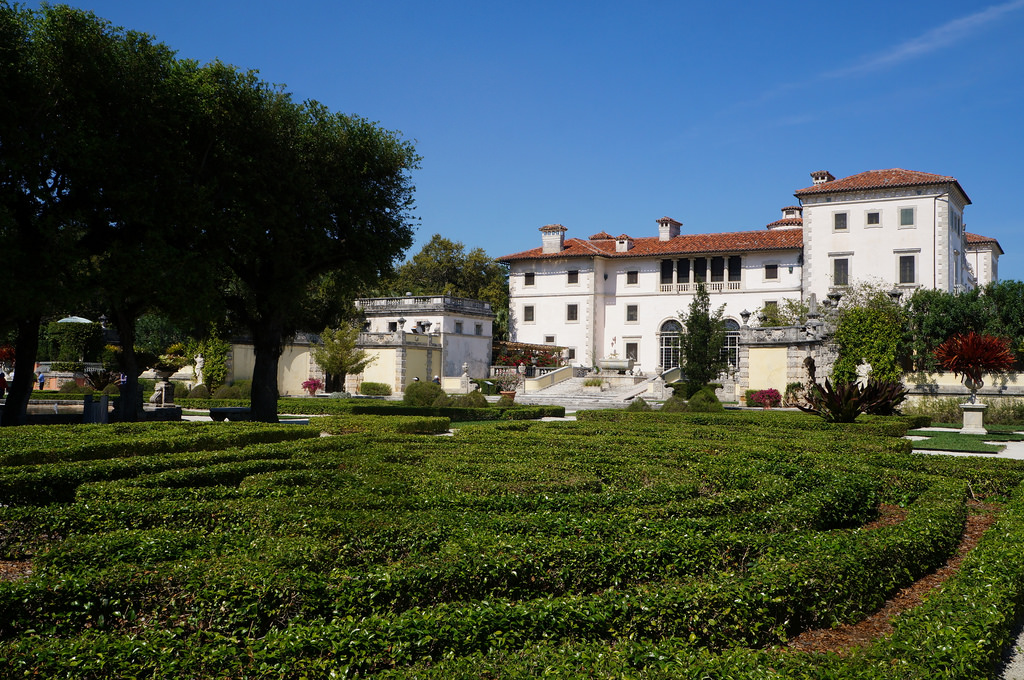 Vizcaya Museum & Gardens ranks among the finest attractions in all of Miami: a fascinating historical site and a gorgeous greenspace, all rolled into one waterfront package. And after you’ve toured the place, pop across the water to South Beach and join us for an appropriately elegant and European-inspired meal at Mercato Della Pescheria on Espanola Way!

The History of Vizcaya Museum & Gardens

Millionaire James Deering of International Harvester fortune sought a balmy winter refuge on doctor’s orders for treatment of his anemia. Vizcaya on Miami’s Biscayne Bay shore became that seasonal retreat, beginning on Christmas Day of 1916. Locally quarried limestone was incorporated into the construction, and Deering expressed his conservationist leanings by preserving most of the native rockland tropical hammock forest on the property.

Deering wintered at Vizcaya—which he named after the Spanish explorer and merchant Sebastian Vizcaino, who allegedly journeyed off these shores in the early 17th century—until his death in 1925, hosting such luminaries as President Warren Harding at his subtropical estate.

After James Deering’s death, Vizcaya passed to his brother Charles. A hurricane clobbered the estate shortly thereafter, causing major damage. Charles’ daughters (James’ nieces) Barbara Deering Danielson and Marion Deering McCormick oversaw the transfer of Vizcaya’s ownership to the county in 1952; a year later, it opened to the public as the Dade County Art Museum and quickly became a major tourist draw. Vizcaya was designated a National Historic Landmark in the mid-1990s.

Better than 300,000 people visit Vizcaya Museum & Gardens every year, marveling at the Italianate villa—packed with European art and furnishings, much of it original to Deering’s estate—and the lavish formal gardens, inspired by the grand plantings of Renaissance-era Italy and France. Besides those exquisitely manicured grounds, you can marvel at a world-class orchid collection within the David A. Klein Orchidarium.

You can explore Vizcaya’s architecture, artwork, and gardens on your own—a self-guided 90-minute audio tour is available in multiple languages—or on public docent-led tours.

Combine a Vizcaya Visit With a Meal at Mercato Della Pescheria

You’re but a half-hour or less from Mercato Della Pescheria here in South Beach when you’re wandering the resplendent interior and landscaping of Vizcaya Museum & Gardens. Follow up your tour of this great Miami landmark more than a century old with an Italian feast at our Espanola Way restaurant: cuisine to complement the Italy-inspired look of James Deering’s winter villa!