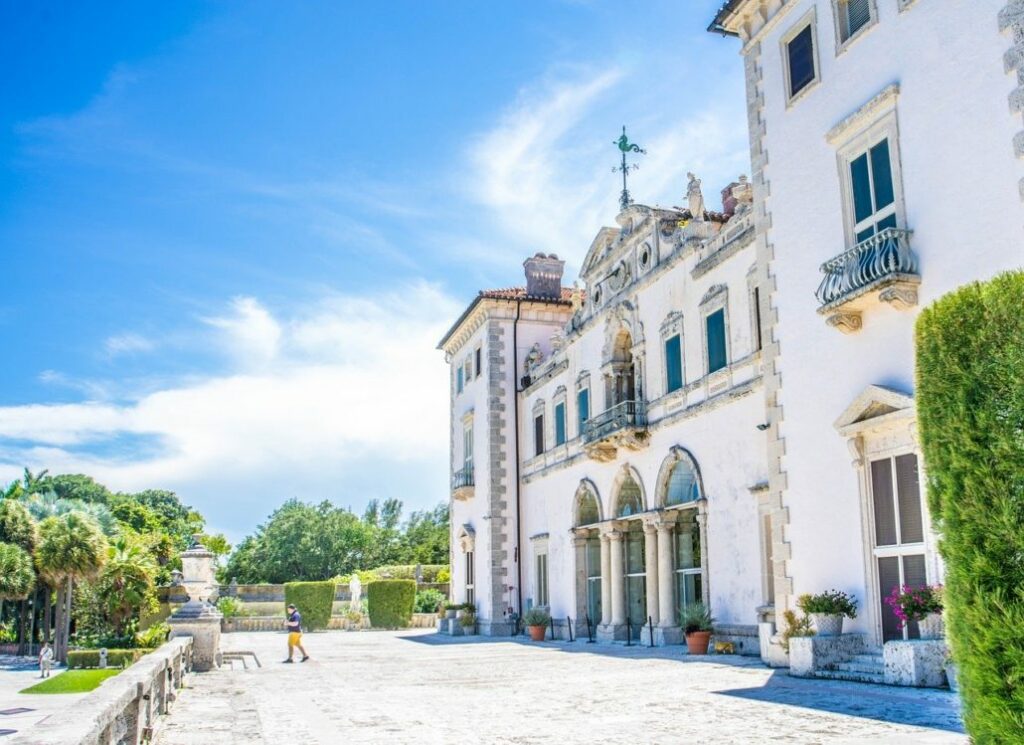 There are not many one-two punches in Greater Miami, we’d suggest, than combining a visit to the Vizcaya Museum & Gardens—one of the metro area’s most glorious and defining landmarks—with an Italian meal along Espanola Way at Mercato della Pescheria! Our South Beach restaurant is less than a half-hour from this historic Biscayne Bay estate, so consider capping off your visit to its stunning seaside grounds with a feast at our table.

Vizcaya came about as the seasonal retreat for the noted businessman James Deering, who had served as vice president of International Harvester (previously the Deering Harvester Company) and had been advised by his doctor to start spending his winters in a balmy clime. His choice was a beautiful swath of South Florida shore along Biscayne Bay, a place he called Vizcaya after the Spanish merchant and explorer Sebastian Vizcaino, who some believe had passed along this coastline back in the early 1600s.

Constructed between 1914 and 1922, Vizcaya’s main house was fashioned after an Italian villa. Deering spent his first winter there in 1916-1917, and in the years before his death in 1925 he hosted more than a few prestigious guests at his Biscayne Bay estate, among them President Warren Harding.

After James Deering died, his brother Charles inherited Vizcaya; in 1952, Charles’s daughters Barbara Deering Danielson and Marion Deering McCormick granted the property to Dade (now Miami-Dade) County. In short order the property had been opened to the public as an art museum, and today it remains one of the best-known historical and cultural landmarks in the Miami area, hosting more than 300,000 visitors each year.

Registered as a National Historic Landmark in the mid-1990s, Vizcaya is an astonishing architectural monument of the Gilded Age. The grandest of its facades is the east, which unfurls down to the stoop of Biscayne Bay. The interior includes an epic collection of Italian furniture as well as historic artwork, while the grounds include exquisite formal gardens scattered with Venetian sculptures as well as works by contemporary sculptors of the era of the estate’s establishment. Among them is the great Barge breakwater fashioned by Alexander Stirling Calder. Part of the grounds include rockland tropical hardwood hammock: native forest Deering preserved during Vizcaya’s construction.

You can take a guided tour of Vizcaya’s astonishments or make your own independent way led by a 90-minute audio tour.

Easy to reach from Vizcaya Museum & Gardens, Mercato della Pescheria offers some appropriate dining for a visit to its hallowed grounds: Our cuisine, after all, is authentic Italian, and our decor comes modeled after an Old World market. There’s no better place, in other words, to reflect upon the architectural, artistic, and landscaping glories of James Deering’s winter estate on Biscayne Bay than our South Beach restaurant!